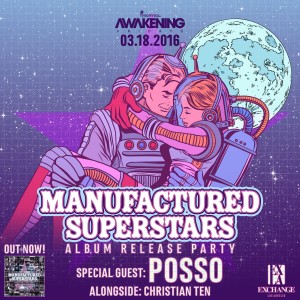 Manufactured Superstars – Manufactured Superstars has established itself as one of the most electrifying acts today. Consisting of Bradley Roulier and Shawn Sabo, the duo have been praised for their entertaining performances and unique mash-ups, earning fans amongst the public and music press alike. In 2009, they started remixing the likes of Calvin Harris, David Guetta, Katy Perry, Afrojack, Tiesto, and Bruno Mars. Their first breakout hit in 2011 – “Take Me Over ft. Scarlett Quinn” received heavy airplay, and was a Top 3 single on both SiriusXM Radio and BPM-TV. The single was such a success that they were asked to play at the Kennedy Space Center in Washington DC to mark the launch of Sir Richard Branson’s Virgin Galactic spaceport. 2011 also marks their first appearance at the Electric Daisy Carnival in Las Vegas, Nevada. The annual festival, which has become known as the premier dance music event in North America, regularly draws over 250,000 attendees, and its’ main stage hosts some of the most biggest DJs in the industry. 2012 marked another big year, as the Manufactured Superstars began having their music broadcast on iHeartRadio.com’s “Evolution” radio show. The program is a partnership with Clear Channel and broadcasts dance music to millions of listeners daily. iHeartRadio alone currently has over 10 million registered users and is one of the fastest growing digital media companies in the world.