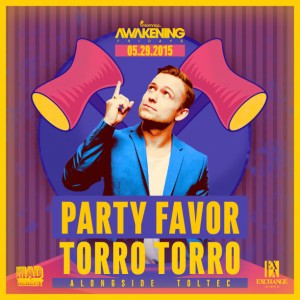 Party Favor – Few acts posses the innovative character and diverse repertoire of Los Angeles’ fastest rising name in bass. Dylan Ragland took the name Party Favor in 2011 to bring a series of unexpected influences to electronic music. The result: an effort that helped to pioneer the festival trap genre, turn heads across the globe and land him a spot on Bombsquad Records where his debut EP charted instantly on Beatport. His first single “Meow” went on to land a Top 10 spot as well just months later. Now he jumps between groundbreaking collaborations twisting genre and creating ingenious original records like “Bap U” from Mad Decent, and more.

Torro Torro – Torro Torro is Mike Gonek and Evan Norton. Originating in the club filled streets of Toronto, the duo has crafted its distinctive electronic sound, influenced by the diversity of the city. Their brand has been defined by melding the best of big room, bass, house and urban genres. With one foot firmly in the main room and the other in the underground, Torro Torro has established itself as a recognized leader in the dance music genre.