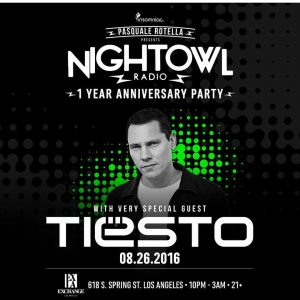 Tiesto – Tiësto is a name that no longer needs an introduction. His name is synonymous with the best of electronic music, and while he is already considered an icon that has not stopped him from continuing his work as an innovator. The Grammy-Award winner has laid down the groundwork for what it is to be a modern-day producer/DJ and is responsible not only for some of the best electronic dance music of all time, but also for inspiring a generation of up-and-coming young artists. Breaking down barriers and shattering records, Tiësto has racked up the titles to prove his stature. In addition to being nominated for two Grammy’s and winning the award for the first time in 2015, he has been named #1 DJ by Rolling Stone, voted “The Greatest DJ of All Time” by Mixmag, ranked the #1 DJ in the world three times by DJ Mag, and was recently presented with the Edison Pop Oeuvre Lifetime Achievement Award (an honor he shares with David Bowie, Quincy Jones and U2 among others).