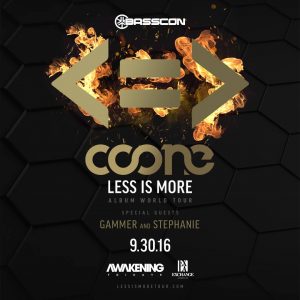 Coone – From a young age, Coone has been mesmerized by music in all its different shapes and forms. The creation of his successful label Dirty Workz was a huge step in this young man’s carreer, allowing him to take his music beyond even his own expectations and also giving new talents within the Hard Dance scene a respectable platform to launch new and exciting sounds into the scene. By the age of 24, Coone was able to lay down an almost impossible feat; completely selling out one of Belgium’s largest venues with over 10.000 Hard Dance fans for an exclusive event – Coone & the Gang. The event has certainly become one of Coone’s most memorable moments, a clear pillar in his life which marked the beginning of big things to come and completely opened the Hard Dance scene in Belgium, boosted by national tv and media coverage. As collaborations with some of Hardstyle’s biggest names rolled in, Coone was able to impress the world with his unique sound within Hardstyle, imprinting a distinct signature sound into his productions. His experience has lead him towards a new “Challenge”; to create an album in 30 days including collaborations with some of the Hard Dance scene’s superstars. The album was met with great support in the scene, catapulting Coone to new heights. Coone’s success within Europe has opened up many doors for him as his eyes are fixed on the horizon, towards the international Hardstyle scene in countries such as Australia and the United States, with a World Tour already in the making. Without a doubt, Coone lives and breathes Hardstyle. His Passion shared by thousands of like-minded souls all over the world, each speaking a universal language. Music. A binding force uniting us all.