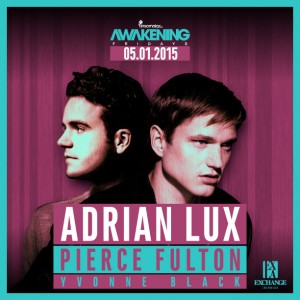 Adrian Lux – Prinz Adrian Johannes Hynne, better known as Adrian Lux, born 1 May 1986, is a Swedish discjockey and music producer. His biggest chart success is “Teenage Crime”. Adrian Lux released his debut album on April 3, 2012. The self-titled album contains 12 tracks including his previous singles “Teenage Crime”, “Alive”, “Fire” and “Burning”, as well as a bonus track “Leave the World Behind.”

Pierce Fulton – Pierce made his first real breakthrough at the age of 18 with his first 3 track EP titled “Pardon My French”. You may have seen the “making of” video where some pretty unconventional sounds were sampled and definitely turned some heads. With breakout singles including Where We Were, Runaway, Old Man & The Sea and most recently Kuaga as well as official remixes for artists ranging from The Killers to Above & Beyond.