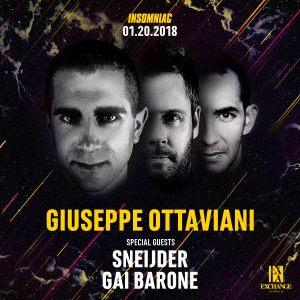 Characterizing trance music’s energy in both approach and output, Italy’s Giuseppe Ottaviani has long been recognized as one of the genre’s most respected and prolific merchants. From his earliest studio work (as the engine behind esteemed group NU NRG), through to his latter-day output under his own name, he has established himself as a benchmark for preeminent trance. Over the last decade his trailblazing Giuseppe Ottaviani Live! and Giuseppe Ottaviani Live 2.0 evolutions have redefined what a DJ does. In doing so, he’s put countless hands in the air and feet on the floor at some of the world’s best-known electronic music festivals, Tomorrowland, Dreamstate, EDC UK, Transmission, ASOT and the FSOE shows being just some of them. Exclusively feeding these performances is a litany of club hits and remixes, of which ‘Ready’, ‘Angel’, ‘Linking People’, ‘Through Your Eyes’ and ‘No More Alone’ represent but a few. Giuseppe’s remains both contemporary and omnipresent in the scene with of-late solo productions like ‘Lost For Words’, the Beatport #1‘Crossing Lights’ ‘Lean On Me’ & ‘No One Like You’ and most recently ‘Slow Emotion’, ‘Brightheart’ & ‘Aurora’ continuing to win trance hearts and minds. In early autumn of 2016, Ottaviani released his third album, the critically applauded, ‘ALMA’, of which MIXMAG said was “everything you could ever want from a trance album”.

Having played at major festivals and events such as Dreamstate, Luminosity, Transmission, A State of Trance, Subculture and Future Sound of Egypt, Irish DJ & Producer Sneijder sets out to meet the world. South Africa, Indonesia, Lebanon, Australia, USA, Canada, South America, Egypt, Malaysia and countries all across Europe have embraced him as an outstanding headliner to anything from massive festivals with a 50.000 strong crowd to intimate club shows, with Sneijder always focusing on what really matters: music.
Sneijder’s sound of now lies heavy on the darker and more techy, club-oriented side of trance, as heard on originals like ‘Polarize’, ‘Silent Treatment’ and ‘Viper’, as well as collabs with Bryan Kearney, Giuseppe Ottaviani and The Noble Six. No less than 7 Beatport number 1’s & multiple Top 10’s have helped cement his name firmly among today’s trance elite, leading to remix invitations by the likes of Armin van Buuren, John O’Callaghan, Solarstone, Aly & Fila and Andain. His debut album ‘Everything Changes’, voted the number 1 trance album of 2015 in the Trance Podium Awards and including the number 1 hit ‘Love Of My Control’ ft. Christina Novelli, showed exactly why he’s a man of diversity, without losing loyalty to the sound he once fell in love with. The same goes for his contribution to the Pure Trance Vol. 5 & In Trance We Trust Vol.20 compilations, each mix carrying a unique flow that’s truly Sneijder. Besides releases on heavy-weight labels like Black Hole and Armada, Sneijder’s also begun an outlet of his own: Afterdark – the home base for up and coming producer talents and a go-to-place for those seeking forward-thinking, original club music. The monthly, 2 hour Afterdark Radio Show, broadcast live on Sneijder’s Facebook every last Wednesday, invites you to that world. Further building his Afterdark brand, travelling from one show to the next and establishing his very own sound in the studio, Sneijder continues to blaze his own trail. Known for his hard hitting, cutting edge trance and tech sound, Sneijder & Afterdark have entered a new era. You’re more than welcome to join it.

Italy’s Gai Barone has rightfully earned his place leading figures in the progressive house and trance scene. His passion for all kinds of music has seen him score hits across progressive, techno, trance… supported by industry giants like Apparat, Above & Beyond, Nick Warren, Armin Van Buuren, Solarstone, Gabriel and Dresden, Paul Van Dyk, Max Graham… DJing since the 90’s, Barone’s sound has moved with the times, yet firmly stayed within the underground. First hitting the big time with ‘Lilith’ on Afterglow in 2008, he’s made appearances on some of the world’s biggest imprints, including Coldharbour, Hope Recordings, Perfecto, Armada… remixing the likes of Markus Schultz, Jim Rivers, Andy Moor, Cid Inc, Evren Ulusoy… Barone’s ascent continued, with hits from original productions like ‘Mr Slade’, ‘Voices Inside my Head’, ‘Alicudi’; and remixes ‘Grube and Hovsepian’, ‘Trickster’, ‘Danilo Ercole – Player One’, ‘Ruben De Ronde – They are not you’, ‘Triucid – Syntax’, ‘Corderoy – Kerosene’… And with preparations underway for his first studio album and a string of high profile remixes in the pipeline, 2014 looks set to be his biggest year yet; with the prolific Italian promising, his best is yet to come!