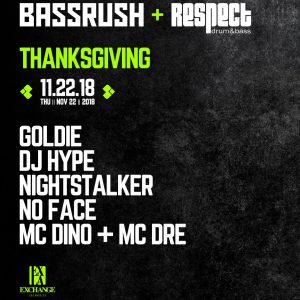 Some people might call what I do drum ‘n’ bass. But I’m not going to narrow it down to what the music industry thinks is commercially viable. I’m not really into narrow thinking. Making this music is like poker. You begin with five cards. You don’t play poker with two cards. That’s just the rule of the game. Once you learn how to play you can bend the rules.

I’ve been in this game for as long as I can remember, seeking out bits of punk rock, pop and reggae when I was still a kid in Walsall. When slap bass days arrived in the mid eighties I started to get into Loose Ends, Change and Maze travelling for funk all-dayers. I even gave Rastafarianism a shot earning myself the nickname Goldielocks, but then the hip-hop scene blew up and you can’t spin on your head if you’ve got locks. So I said see you later to that!

Hip hop allowed me to express myself artistically for the first time. Doing graffiti art made me learn how to make something out of nothing, and it got me involved in the music scene. I spent time in New York exhibiting my work and appeared in Africa Bambatta’s feature film ‘Bombing’ as one of Britain’s top graffers. That rocked. In ’86 I moved out to Miami and started a business selling engraved gold teeth. By 1990 I was on the move again, to London, where something very special was about to kick off…

The club was Rage at Heaven. Everyone was just going for it. The adrenaline was pumping around the place. I heard DJs playing a weird hybrid sound, there was still the late rave stuff but here was a new sound, a mad fusion of the old and new. I’d always been the sort of kid who wanted to belong and felt like I’d found a home. In ’92 I produced my first track as Ajax Project while I was doing some design and A&R work for 4Heros’s Reinforced label. My next tunes Killermuffin and Menance were put out under my early moniker Rufige Kru1 on the Metalheadz label. But at first I was just this deranged kid at Rage with gold teeth shining, this nutter talking a million miles an hour. I remember clutching the cage, watching Fabio or Grooverider take the record I’d made out of the box and put it on the deck and thinking “Fuck, fuck”!

Although his Ganja Records label and tracks released under his own name and with the Ganja Kru have helped, it’s the “DJ” at the front of Hype’s name that has proved most important in raising his profile to the level of the Grooverider’s, Goldie’s, and LTJ Bukem’s of drum’n’bass. A battle DJ of renown (he represented England in the 1989 DMCs), Hype had a history of electrifying deckwork before moving on from his reggae and hip-hop roots in the late ’80s and latching onto house and hardcore. He was an early force on one of London’s most influential pirate stations, Fantasy FM, and since then he’s consistently topped bills on the international DJ circuit, landing awards for Best Male DJ and Best Radio DJ (in 1994 and 1995, respectively) at the U.K.’s prestigious Hardcore Awards. He’s also one of London’s popular Kiss FM’s biggest attractions and was the force behind Suburban Base’s popular multi-volumed mixed compilation series, Drum and Bass Selection. A champion of jungle’s dancefloor purity, Hype has also rallied consistently against jungle’s compartmentalization into artificial “scenes” such as ambient/intelligent and hip-hop/ragga. (Of course, his sets tend to consist almost exclusively of the latter, which somewhat undermines his argument.)

Hype began producing in 1990, engineering and co-producing tracks (including chart-toppers such as “Exorcist” and “The Bee”) for hardcore staples Kickin’, Strictly Underground, and Sub Base. Although he never lost touch with his breakbeat roots (even going so far as to spin hip-hop instrumentals over house tracks to add a bit of rhythmic flare), it wasn’t until he launched his own Ganja label in 1994 (with “Cops”) that he began seriously focusing on the post-rave possibilities of sampled breaks. The Ganja label’s almost immediate popularity — primarily through floor-fillers such as DJ Krome & Time’s “Ganja Man” and DJ Zinc’s penultimate 1995 anthem “Super Sharp Shooter” — peaked in late 1995 with Still Smokin’, a combined-release label compilation between Ganja and cohort Pascal’s Frontline imprint, which became one of the highest-selling independent jungle compilations. Re-pressed in 1997, that success also led to a major label deal with MCA’s Parousia sublabel and the establishment of True Playaz Music, a Hype-led DJ and production unit also including Zinc, Pascal, and Rude Bwoy Monty. True Playaz the label has also come to the fore as one of the more consistent outlets for innovative hardstep, a style that all but disappeared during the jump-up- and techstep-dominated mid-’90s.