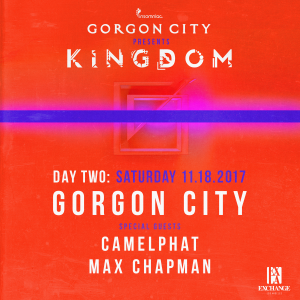 Signed to the mighty black butter records, the beginning of Gorgon City coincided with the label’s explosion into the mainstream, spearheaded by label mates Rudimental. While working on their second LP release, they tour the globe with an insatiable appetite, winning over crowds with their DJ sets and full live show from Ibiza to Tokyo, hitting every major music festival across UK, Europe and n. America along the way. “There wasn’t one point where it wall went crazy” says Kye Gibbon; “Let’s just say it’s been a steep incline!” If there’s a summation of the current situation of Gorgon City – the duo of Gibbon and Matt Robson-Scott – this is it. The pair have achieved quite startling success, from a run of chart hits and star collaborations at home to an international presence that increasingly sees them getting stuck into hard touring and playing to enormous crowds of dedicated fans around the world. But there’s never been a single “breakthrough moment” for them, rather a continual accumulation of achievements. This has been based on an intense work ethic and understanding of their audience, but also on a willingness to experiment and step out into the unknown – as they’re doing now with the gradual release of their new project week by week throughout 2016 – something which stands them in good stead as they get ready to settle in for the long haul. The past year and a half since Sirens, Gorgon City’s debut album, has definitely been crazy, though. Co-curating a compilation album with Pete Tong, remixing and collaborating with long-time heroes like Basement Jaxx and Underworld, creeping ever-higher on the billing in US and UK festivals, embarking on a proper transcontinental tour of the USA in two tourbuses over the best part of a month, untold DJ dates, and still finding time to conjure up and embarrassment of riches in the studio: there’s scarcely been a moment for the pair’s trainers to touch the ground. Yet there is not a sign of jadedness from them yet. If anything, the new material shows them settling into their groove and being more confident in branching out in all directions, from main-stage bangers to underground club groovers, 21st century hyper-pop to twisted acid house and righteous breakbeat, it’s the sound of two young men still having the time of their lives.

We don’t know where CamelPhat hail from. We don’t know the first records they bought. We don’t know what they had for breakfast. We don’t know their names, their ages, their favourite colour or their shoe size. We don’t know if they can completely close their nostrils. These are the facts we do know: They are a duo. They earned their stripes and studied dance music dynamics as resident DJs long before they produced. They rarely give interviews. They make authentic, timeless house music. They have enjoyed DJ support from their very first release in 2010 which has grown with every release. Adam Beyer, Adana Twins, Annie Mac, Carl Cox, Danny Howard, Eric Prydz, Erick Morrillo, Gorgon City, Groove Armada, Hotsince82, Huxley, Mark Knight, MK, Pete Tong, Riva Starr, Sasha, Sonny Fodera, Tiga & The Disciples are just some of the premiership tastemakers who have galvanised their sets with CamelPhat’s emotion-rich, sub-soaked, silky-synth sounds. These sounds have been shipped across the board, from the most high profile electronic labels to the most respected underground imprints in operation, CamelPhat’s versatility and ageless sense of spacious house sonics sing to DJs across the great international house/tech landscape, causing the hype pot to bubble from day one. Things got serious in 2014 when their tracks ‘The Act’ and ‘Paradigm’ both scorched number one in the Buzz Chart. In 2015 ‘Constellations’ hit the same spot. A track that went on to become a verified biza anthem, ‘Constellations’ soundtracked every corner of the Isle from Salinas to Sankeys by way of the iconic Café Mambo. 2015 was also the year they made their international and festivals debuts and Pete Tong signed their year out declaring them as his breakthrough act of the year. Rolling into 2016 and Danny Howard declared ‘Trip’ as his ‘go-to record for this year’s summer festivals’ while Annie Mac premiered it as a special delivery, describing it as ‘huge’. Backing up these premiership forecasts with everything they’ve done so far – and everything they’re about to do – CamelPhat have remixed the likes of MK, Foxes, Billon, Robosonic, Seinabo Sey, 4Tunne500, Illyus & Barrientos, TCTS, Yoko Ono, Kidnap Kid, TCTS and many more. They’ve worked on labels such as Toolroom, Suara, Glasgow Underground, Great Stuff, Area10 and Jeudi and have some special surprise collaborations in store for 2017. CamelPhat performed across the UK, Europe, America and beyond in 2016 with highlight bookings at Fabric, Ministry, Rainbow and Stealth for UK club shows while UK festival bookings include We Are FSTVL, Creamfields, SW4, Leeds Festival, Tomorrow Land and Groove. The summer saw the duo feature in Ibiza at Amnesia, Pacha & last year of Space plus three North American tours throughout the year, kicking off at the Miami Music Conference & ending at EDC Halloween Proof that the music alone can still do the talking when it’s strong and striking enough and produced with the right amount of soul: These are the facts, the rest remains a mystery…