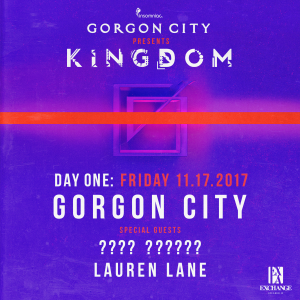 Signed to the mighty black butter records, the beginning of Gorgon City coincided with the label’s explosion into the mainstream, spearheaded by label mates Rudimental. While working on their second LP release, they tour the globe with an insatiable appetite, winning over crowds with their DJ sets and full live show from Ibiza to Tokyo, hitting every major music festival across UK, Europe and n. America along the way. “There wasn’t one point where it wall went crazy” says Kye Gibbon; “Let’s just say it’s been a steep incline!” If there’s a summation of the current situation of Gorgon City – the duo of Gibbon and Matt Robson-Scott – this is it. The pair have achieved quite startling success, from a run of chart hits and star collaborations at home to an international presence that increasingly sees them getting stuck into hard touring and playing to enormous crowds of dedicated fans around the world. But there’s never been a single “breakthrough moment” for them, rather a continual accumulation of achievements. This has been based on an intense work ethic and understanding of their audience, but also on a willingness to experiment and step out into the unknown – as they’re doing now with the gradual release of their new project week by week throughout 2016 – something which stands them in good stead as they get ready to settle in for the long haul. The past year and a half since Sirens, Gorgon City’s debut album, has definitely been crazy, though. Co-curating a compilation album with Pete Tong, remixing and collaborating with long-time heroes like Basement Jaxx and Underworld, creeping ever-higher on the billing in US and UK festivals, embarking on a proper transcontinental tour of the USA in two tourbuses over the best part of a month, untold DJ dates, and still finding time to conjure up and embarrassment of riches in the studio: there’s scarcely been a moment for the pair’s trainers to touch the ground. Yet there is not a sign of jadedness from them yet. If anything, the new material shows them settling into their groove and being more confident in branching out in all directions, from main-stage bangers to underground club groovers, 21st century hyper-pop to twisted acid house and righteous breakbeat, it’s the sound of two young men still having the time of their lives.