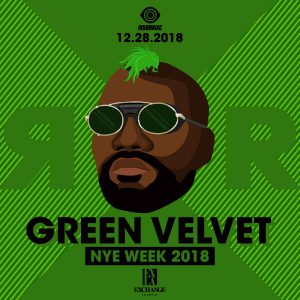 Green Velvet (aka Cajmere) studied chemical engineering at the University of Illinois, where he exposed himself to the energetic culture and lifestyle of house. In 1991, midway though graduate school, Cajmere returned to Chicago to pursue his dream of producing house music.

In 1992, after surviving on cheese sandwiches and maximizing credit limits, Cajmere finally made an imprint on the dance community with his infectious experiment, “Coffee Pot” (It’s Time for the Percolator) – Clubhouse Records. Then he moved on to more complex musical and lyrical arrangements with songs like Lidell Townsell’s “Get With U” (Mercury Records).

The Cajmere and Dajae collaboration resulted in a #2 Billboard Dance Chart and International dance hit – “Brighter Days”. It was at this point that Cajmere decided to start Cajual Records. Having his own label gave Cajmere the autonomy to attain his goal of developing a sound that was representative of Chicago – thus, putting Chicago back on the map.