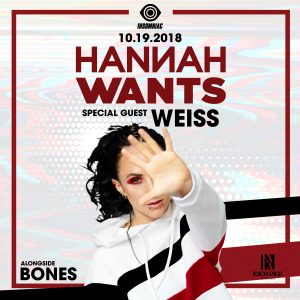 “Her tireless dedication to her cause, down-to-earth attitude and downright amazing talent has cemented her place as one of the UK’s most sought after artists” – Skiddle

A child of the garage generation Hannah Wants has validated herself as a world renowned DJ with some serious credentials.

Armed with an innate desire and passion to practice the art of DJ’ing from a young age Hannah has worked tirelessly for over a decade to pursue her DJ dream. Throughout this journey Wants has acquired an individual hard-hitting style and true competence behind the decks.

Nourishing her addiction to music the Birmingham (UK) born DJ dedicated the summer of 2010 to Ibiza. Following a number competition wins, an unexpected headline opportunity at Es Paradis and an invitation to run her own weekly night at Viva, it was there on the White Isle that Hannah really started to make a name for herself.

Hannah’s main aim is to build a solid yet unique reputation for her live DJ sets and after a record amount of sell out events over the last twelve months she has dramatically risen from self-taught DJ to an unquestionable worldwide name on the house and bass music scene.

Championing music that is true to herself Wants further constitutes herself as one of the biggest names in dance music with her newly appointed Radio 1 residency, bi-monthly mixtape series and music productions.

What Hannah wants, Hannah seems to earn. 2015 welcomes her new and self-titled brand ‘What Hannah Wants’ – the title will be leading Hannah’s headline tours, various festival takeovers around the globe as well as readily endorsing newfound talent along the way.

With a majestic career already under her belt it’s Hannah’s developing knowledge, skills and experience alongside a true enjoyment of music exploration and giving back to her supporters that will see her name remain at the forefront of the electronic music scene.

What makes Weiss stand out as a DJ/producer? It’s the fact he embodies the spirit and simplicity of that original House sound. With a love of old school jackin’, Chicago House – combined with a modern approach to his productions and sets – as an artist he has a unique and individual style that’s won plaudits from across the scene.
After a spectacularly successful intro to the scene in 2013 which saw Weiss being championed by the likes of Groove Armada, Green Velvet, Loco Dice, Kenny Dope, Pete Tong & more, the hit single ‘My Sister’ rotating on BBC Radio 1 whilst staying strong in the Beatport top ten chart for over four months, and countless gigs all over Europe, it was plain to see that Weiss was here to stay. Following this lead, Weiss has risen to even greater heights, with his releases inspiring support from the most respected & freshest names in the industry, including Gorgon City, Eats Everything, Shadow Child, Hot Since 82, Claude Vonstroke, Green Velvet, Annie Mac and more.

Reading through his discography is like an accolade to underground club hits, with original productions like ‘Guitar Man’ ‘Man Gone’ ‘Our Love’ & ‘I Believe’ delivering that classic Weiss production, ranging from defining vocals to that unmistakable rumble and old school drums of the driving club cuts. More recently his summer anthem “You’re Sunshine” ignited both the clubs and radio becoming one of the most recognized tracks of 2016 with countless Radio 1 plays whilst becoming one of the “most played” tracks of the summer on Sirius FM, one of the biggest stations in the U.S. Similarly Weiss has seen Huge demand for remixes, including MK, Rudimental, Gorgon City, Green Velvet, Tube & Berger & more all looking for that distinctive Weiss sound. Most recently he has seen success on labels such as Dirtybird, Relief, Play It Down and Toolroom, with every release racing up Beatport’s charts whilst gaining widespread support from his peers and across global radio waves.
Touring has seen Weiss play on some of the world’s most famous stages, including Fabric London, BPM Festival Mexico, Kosmonaut Berlin, Exchange LA, Treehouse Miami, Cielo New York, Vista Club Ibiza, Sankeys Manchester, Revolver Melbourne and many more.

Over the past 12 months Weiss has showed no signs of slowing down, culminating with a DJ Mag Best Of British nomination and the world-renowned BBC Radio 1 inviting him on to Pete Tongs Essential Selection for the ‘Afterhours Mix’ where he was able to showcase his darker side with a suitably driving mix ranging from 6am heavyweights across to forgotten 90’s classics.

Trends in dance music will always come and go, Weiss is an ambassador for real House music, championing the original Jackin’ Chicago house sound, and with a string of exciting projects, collaborations and hotly tipped releases on their way, expect nothing but the hottest and most underground cuts from this rising star…