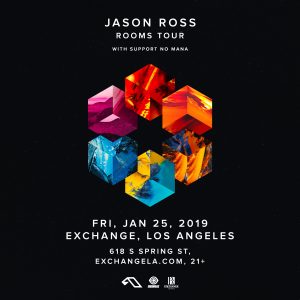 Jason Ross’s footprint as a diversified electronic music artist continues to grow deeper. He’s produced with Seven Lions on their anthems “Higher Love” and “Ocean”, collaborated with Above & Beyond on remixes, and played some of the world’s most renowned venues like Red Rocks and The Gorge. His tracks have received support from the prominent producers including Armin Van Buuren, Kaskade, Avicii and many more.

2018 has proved a year for the books, as Jason continued to broaden his sound with an eclectic array of new tracks. Ophelia releases “Into You” and two new Seven Lions collaborations (“Ocean” and “Sirens”), along with a remix of Illenium’s “Needed You”, showed his increasing dexterity, while a smash collaboration with Cosmic Gate and a remix of Haliene’s “Dream In Color” maintained his production roots.

His upcoming 6-track Rooms EP will introduce fans to both new and familiar sounds, showcasing Jason’s mastery of production, while preserving the emotive qualities of his music. Accompanied by his largest headline tour to date, it’s a smash beginning for 2019 that harls far more to come through the rest of the year.