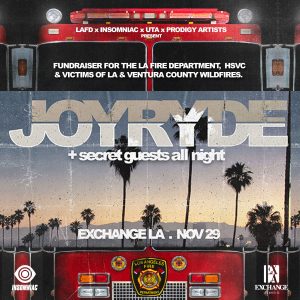 JOYRYDE rose from completely unknown to one of the most buzzing electronic acts on the planet in 2016. With support from the likes of DJ Snake, Major Lazer, Big Gigantic, Yellow Claw, Tchami, Knife Party, NGHTMRE, GRiZ, Don Diablo, Ephwurd, Ghastly, Dyro and Jauz – who champions his “Stick It In Reverse” mix of last summers hit “Feel The Volume” and has been opening his sets with it for months – it’s clear that the highway to success is paved with bass. YourEDM agrees, and included JOYRYDE in their list of Top 10 producers of 2016.

His C.A.R stage production, or “Calling All Rydrz” is the first of its kind, and features the artist perched atop at 1969 matte black Dodge Charger tricked out with all your favorite rave amenities spewing everything from garage and house to UK Grime and Hip Hop. The stage debuted at Avalon in Hollywood and Webster Hall in New York City, and more dates are set for 2017.

JOYRYDE also frequently puts out seasonal apparel on his self designed line #RYDRWARE, which can be found on his website. With an arsenal of unreleased tracks, all the big names chatting about him, and some lofty touring goals, JOYRYDE is sure to hit the ground running in 2017… and bring all his Rydrz with him.