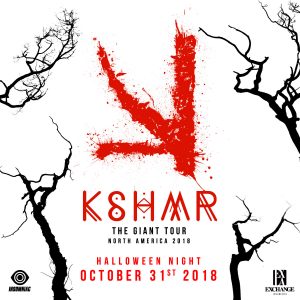 Niles “Cyranizzy” Hollowell-Dhar (born 6 October 1988), better known as KSHMR, is coming up as one of the more memorable names in the electronic music industry. KSHMR is based in Berkeley, California, and since 2013, KSHMR has been making EDM after leaving the indie-pop duo The Cataracs.

KSHMR first got his name in the EDM scene with the song “Megalodon” as his first big tune released in the early years of 2014. KSHMR is also known for contributing to compositions for many famous producers like Borgeous and DVBBS. Most of KSHMR’s tracks are released under Spinnin’ Records. KSHMR started raising attention when his single “Burn”, a collaboration with DallasK, debuted reached the Top 40 chart on Beatport then eventually reached #1. The song has been released through 3 labels: Revealed Recordings, Spinnin’ Records, and Ultra Records.

Niles revealed himself as KSHMR at Ultra Music Festival and was introduced by Tiësto himself. His track, “Secrets”, a collaboration with Tiësto and Vassy was a huge EDM hit. The track streamed through buzz charts, and reached the top of the Beatport Chart. KSHMR has had a number of Beatport hits, such as ‘No Heroes’, ‘Burn’, ‘Secrets’, ‘Dead Mans Hand’, ‘Kashmir’, ‘Dogs’ and ‘Karate’.