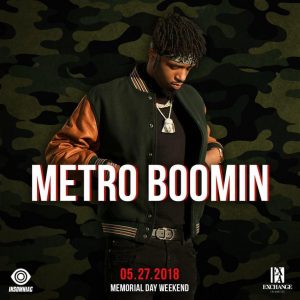 Within five years of his first output with Future, producer Leland Wayne amassed well over a dozen Top 20 R&B/hip-hop hits and a similar quantity of gold and platinum RIAA certifications. The St. Louis, Missouri native did it with a low-gloss, jet-black sound sufficiently reflected in his alias, Metro Boomin. Wayne got into production during his early teens and also rapped, though he eventually opted to devote all his energy to beatmaking. He connected with artists through social media, and prior to graduating high school, he’d logged thousands of miles on round trips to Atlanta, where he worked with the likes of OJ da Juiceman and eventually, Gucci Mane and Future. Wayne fulfilled his mother’s dream by being accepted to the conveniently located Morehouse College, but he dropped out, and invested more in making music than in studying business management.

In 2013, Wayne’s name was on Billboard charts for the first time as the producer of Future’s “Karate Chop” and “Honest.” Just after the latter single was officially out, Wayne self-released 19 & Boomin. Once iLoveMakonnen’s “Tuesday,” another early triumph, hit the R&B/hip-hop Top Ten the following year, Wayne was a constant presence near the top of that chart. Drake and Future’s “Jumpman” and Future’s “Low Life” were among the early 2016 hits, followed later in the year by “X” — taken from Savage Mode, his self-released EP made with 21 Savage — and Migos’ “Bad and Boujee,” which eventually topped the R&B/hip-hop and pop charts. Among Wayne’s subsequent hits through a notable 2017 were Big Sean’s “Bounce Back,” Post Malone’s “Congratulations,” Kodak Black’s “Tunnel Vision,” and Future’s “Mask Off.” The year remained a busy one, as Wayne later released a trio of collaborative mixtapes, including Perfect Timing, with Canadian rapper NAV; Without Warning, with Offset and 21 Savage; and Double or Nothing with Big Sean.