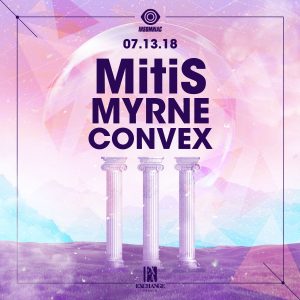 MitiS has been perfecting his special breed of piano-driven melodic bass since 2010. Brought up as a Classical pianist in Pennsylvania, MitiS, aka Joseph Torre performs a live set that combines his production chops and piano roots to get the absolute best of both worlds. He’s an artist in the purest sense, pouring his soul into every release. And as his vision of the world becomes more refined, so does his writing.

Torre says, “I just want to share good music, have it be through performance or a small, simple social setting. Music is what I do, I wouldn’t change that for anything. Have it be a Chopin piece playing in a hall, or a bass kickin the club’s ass, I’m down for either.”

He may be down for either, but really excels at a strong combination of both. “I find myself unable to stop making phat basses, heavy beats,and throwing melodies into the mix… I can’t think of anything else more appetizing; It’s the new age Classical.” Many a fan has told Torre that they can recognize a MitiS song by its first note, the supreme compliment for any musician.

A smooth blend of R&B, future pop and mainstage energy, MYRNE garners fans in both the realms of easy listening and heavy bass alike. His energetic live shows, coupled with his years of classical training has planted him at the forefront of electronic music’s newest wave.

MYRNE released his debut 4-track EP Softsins on Mad Decent in November 2015, inaugurating himself as the only Asian artist on the roster.

Zack Morgan created Convex when he re-directed his lifelong focus as a rock guitarist to produce electronic music. With support from the likes of Knife Party, Tiësto, Snails, Destructo, Wax Motif, and Black Tiger Sex Machine, Convex has racked up millions of streams, quickly rising through the ranks of the dance music community. Beyond his meticulous productions, Convex delivers live. Following his critically acclaimed debut at EDC Las Vegas, his dynamic, high energy sets continue to rock festival crowds at events such as Nocturnal Wonderland, Countdown NYE and Escape: Psycho Circus to name a few. Being a Los Angeles native, Convex’s performances have generated an avid following in the LA club scene, so it’s no surprise that his upcoming travels will only add to his quickly growing fan base. With all this momentum on his side, Convex is poised to deliver his most creatively compelling year yet.