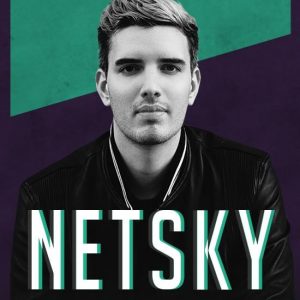 Rarely have we seen someone rise through the ranks as quickly as Boris Daenen, a.k.a Netsky. Leading a wave of new skool D+B talent from Europe with his blend of uplifting, melancholic melodies and heavy dancefloor bass + beats, Netsky’s popularity is astounding. A celebrity in his own country, he has received numerous awards and accolades and continues to impress audiences across the world with his Netsky LIVE! show with full band.

Netsky signed exclusively to Hospital in late 2009; his first release was the iconic “Memory Lane” (as featured on “Sick Music 2″ in 2010) and this was swiftly followed up by his chart topping debut album – “Netsky”– in May of the same year. Following virtually unanimous praise and hype from all corners of the globe, it plunged Netsky firmly into the limelight, where he has remained ever since, delivering a potent mix of dancefloor anthems, vocal led classics and that clean cut new jungle sound which has become his trademark.

Since then, Netsky’s profile as a remixer has been affirmed by his huge remixes of ubiquitous club anthems such as Pendulum – “Witchcraft”, Plan B, Leftfield – “Release The Pressure”, Audio Bullies – “Only Man”, Swedish House Mafia – “One”, Jessie J – “Nobody’s Perfect” and Rusko – “Everyday” and more.

Alongside all this, is Netsky’s hectic DJ schedule and he seems to have a Midas touch, able to transform even the most subdued of parties into an ecstatic, bouncing rave within a matter of minutes. It is no coincidence that he was nominated for the Radio One ‘Essential Mix Of The Year’ in 2010.

In April 2012, Netsky unveiled the incredibly impressive Netsky LIVE! show at Hospitality Brixton – a full live show with a band which he continues to tour the world with, having completed tours of the USA, Australia, New Zealand and Europe. The highly anticipated sophomore album “2” landed late in June 2012 and immediately hit the UK Top 30 and No. 1 in his home country of Belgium, later going on to reach platinum sales. 2013 has seen the ascension of Netsky LIVE! to even greater heights, with a highlight being the sell-out stadium show at the Lotto Arena in April. One thing’s for sure, 2013 is looking to be another golden year for Belgium’s premium D+B export.