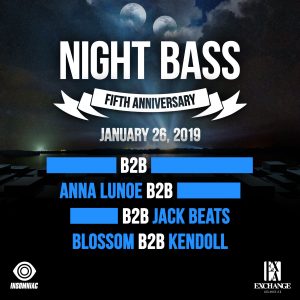 Australia-born, Los Angeles-based DJ Anna Lunoe is an in-demand singer, songwriter, and producer known for her dance-oriented, electronic pop sound. A native of Sydney, Lunoe started playing music in her teens, initially on piano and guitar. However, after leaving school she began experimenting with DJ’ing and computer production. After working for FBi radio, she began producing the popular Clubbers Guide mix compilations for Ministry of Sound, several of which topped the internet dance charts and went gold. Around 2012, she relocated to Los Angeles and released the EP Anna Lunoe & Friends, which featured guest spots from Flume and Touch Sensitive. She also continued to build her fan base with numerous live appearances, including DJ sets at Electric Daisy Carnival, Coachella, Ultra, and TomorrowWorld. More well-received singles followed including 2014’s “B.D.D. (Bass Drum Dealer),” 2016’s “Radioactive,” and 2017’s “Bullseye.” Also in 2017, she toured with Diplo, and the Weeknd, and closed out the year with the launch of her own Hyperhouse brand and tour. In 2018, she returned with the single “Blaze of Glory.”

This year, UK duo Jack Beats are celebrating a decade as pioneers of a trademark hybrid sound that fuses hip-hop, house, and drum ‘n’ bass. Since 2007, Jack Beats have been awarded a thriving international fanbase with their forward  thinking approach to production and DJing that has resulted in festival bookings worldwide, including Electric Daisy Carnival and Beyond Wonderland coming up in 2018.

Following 2017 releases with DJ Zinc titled “The Anvil”  and the Modulate EP, the duo, real names Niall Dailly and Ben Geffin,  are kicking off 2018 with another new EP, this time finding a home at Insomniac Records. Titled ‘Vibrate,’ the double header EP hears Jack Beats delve deep into a complex multi-genre sound. First up, the project’s title track enlists Sir Michael Rocks of The Cool Kids to lay down a set of whirlwind rhymes atop a Jack Beats’ production that channels a notable G-House feel. The companion track, “Keep On,” falls into familiar Jack Beats territory with a roving house music rhythm jam packed with punchy bass and synth experimentation to give the song a classic-meets-current sound.