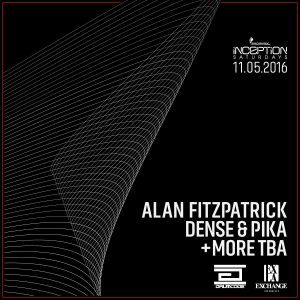 Alan Fitzpatrick – Having enjoyed a breathlessly successful 2015, there can be no doubting Alan Fitzpatrick’s position as one of the most influential electronic artists of the moment. Pumped up by yet another series of head-turning productions over the previous twelve months, the Englishman’s profile continues to transitionrapidly from the techno underground towards the electronicmusic main stage , attracting significant attention from BBC Radio 1, Mixmag and Resident Advisor and elevating Fitzpatrick to the position of global headliner. A status supported by the release of Fitzpatrick’s Fabric 87 mix compilation in April 2016 and the accompanying 25-date tour that will roll out across Europe before touching down in North and South America. Already a universally respected and in-demand producer, Fitzpatrick has succeeded in carving out his own musical niche within the ever-expanding genre of techno, earning him the reputation of a seemingly unstoppable source of hit music. Tracks such as ‘Love Siren’, ‘Truant’, ‘Skeksis, ‘For An Endless Night’, ‘Always Something For Nothing’ and ‘Reflections’ (a BBC Radio 1 Essential New Tune) have all topped sales charts since 2009, drawing high praise from peers and tastemakers across genre divides for the vibrancy, originality and inventiveness that has come to characterise Alan Fitzpatrick’s music. Whether he is adding diva vocals to cavernous beat workouts, fusing emotive chord sequences with trademark heavy-funkgrooves, blending jungle beats and hardcore bass lines with barnstorming techno dynamics, or conjuring up sumptuous low-slung soundscapes; Alan Fitzpatrick knows how to move your mind, body and soul by delivering tracks that stand out from the norm.