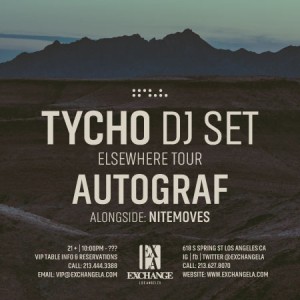 Tycho – An American ambient music project led by Scott Hansen as primary composer, songwriter and producer. Hailing from San Francisco, California, he is known as ISO50 for his photographic and design works. His music is a combination of downtempo vintage-style synthesizers and ambient melodies. The style of his music is very organic, typically incorporating clips of the human element into his songs (i.e. weather broadcasts, simple talking, or even breathing). His song, “Dictaphone’s Lament”, was used as the track on a music video entitled “Live Life to the Fullest”, which was made by and featured on the action cartoon block Toonami. His song “Cascade” (originally made for an Adult Swim and Ghostly International compilation called Ghostly Swim) was played during the final moments of the original 11-year run of Toonami in 2008. As of December 2014, Tycho is signed to, and has released under, Ghostly International, but has also released music on Merck Records and Gammaphone Records.