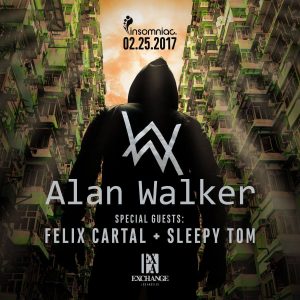 Alan Walker – British-Norwegian EDM producer Alan Walker was a mere 18 years old when his track “Faded” became a massive European hit, topping the charts in ten countries and entering the Top Five in six more. Born August 24, 1997 in Northampton, England to a Norwegian mother and British father, Walker moved with his family to Bergen, Norway at the age of two. A true post-millennial child, Walker grew up surrounded by technology and became fascinated by computers. In 2012, inspired by EDM producers K-391 and Ahrix, whom he’d discovered on YouTube, and film composers Steve Jablonsky and Hans Zimmer, he began to create his own music on his laptop. Working in the genre of “drumstep,” a kind of slowed-down drum’n’bass, he eventually uploaded the instrumental track “Fade,” which was soon picked up and re-released via the No Copyright Sounds (NCS) YouTube channel and free net label that promoted the two aforementioned EDM artists.