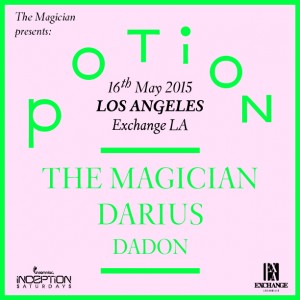 The Magician – The Magician is the alias of talented DJ/Producer, Stephen Fasano.  One night not so long ago, he appeared from a place between space and time. Apparently he stepped into this world, materializing in a cloud of crystal stars and soft pink smoke. Some claim he’s a former airline pilot who crashed an afterparty – some say it’s all just an illusion, a well performed hoax. Previously a member of revered Balearic disco duo, Aeroplane, he disembarked that flight and boarded his own magical carpet ride in 2010. He released his debut single ‘I Don’t Know What To Do’ on Kitsune in 2011, then joined forces with Peter (aka Yuksek) for three furthers EPs (Twist , Memory and On My Brain). However, most fans will probably know of The Magician for his killer remixes. Especially his re-work of Lykke Li’s “I Follow Rivers” in 2011 (which has had over 50 Million views on Youtube and chart topping placings across Europe) and Clean Bandit’s “ Rather Be” earlier this year.