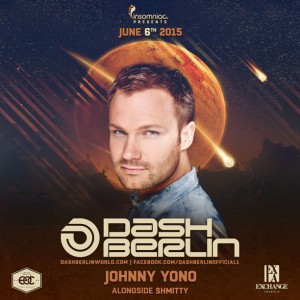 Dash Berlin – A progressive-trance project created in 2007 in The Hague, Netherlands by Eelke Kalberg and Sebastiaan Molijn. The front man of the group is the DJ Jeffrey Sutorius. Kalberg and Molijn have been contributing to the international dance scene for over ten years, with award-winning and platinum-selling hits for dance acts such as Alice Deejay, Vengaboys, Candee Jay, Pronti & Kalmani and Solid Sessions. They also have been working together with DJ Sander Kleinenberg on classic tracks like “This Is Miami” and “The Fruit” and remixes for major artists such as Justin Timberlake, Janet Jackson, BT, Usher, N.E.R.D., Lenny Kravitz, Junkie XL, Röyksopp, Mylo, and Annie Lennox.

Shmitty – The Los Angeles-based, Netherlands-born producer/DJ combines funktion and form with style, taste, and class; he mans the decks like a sniper at the watchtower, with house and techno as his artillery. A chameleon onstage, shifting from groovy down-tempo to cultish techno, he covers the full spectrum of true house music. With a deep knowledge of the history of electronic music and with a direct mainline source to the current music landscape, Shmitty melds past and present in all his meticulous sets, which have allowed him to share the stage with a diverse roster of dance music titans, including A-Trak, Claude VonStroke, Dash Berlin, Cosmic Gate and countless others. The stage is his first home, having performed at some of the top venues and music festivals across the US, including Escape from Wonderland and the Hollywood Palladium, as well as Los Angeles nightclubs Create and Exchange LA, where he holds a double residency.