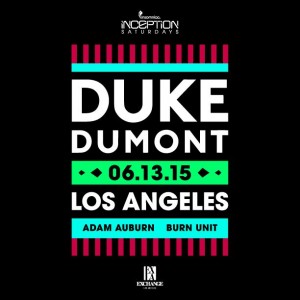 Duke Dumont – Adam George Dyment (born 27 August 1982), better known by his stage name Duke Dumont, is a British DJ and deep house producer. He is best known for the singles “Need U (100%)”, “I Got U” and “Won’t Look Back” which reached Number 1, 1 and 2 in the UK Singles Chart respectively. He owns the record label Blasé Boys Club and has also used it as an alias for production. He has remixed a number of songs, including several which have charted in the United Kingdom. In 2014, “Need U (100%)” was nominated for “Best Dance Recording” for the 56th Annual Grammy Awards.