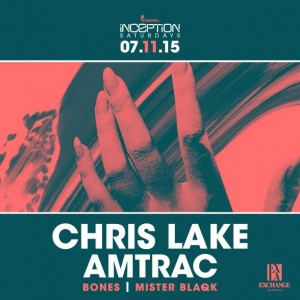 Chris Lake – Chris Lake taps into a singular spirit evocative of dance music’s golden age by infusing funked-out grooves and natural instrumentation into decidedly modern house. It’s a sonic aesthetic that instantly incites movement and has established him as a trailblazer in the electronic dance music world. That perspective also set the stage for his forthcoming full-length debut available on Ultra Music in 2014. At 14-years-old, the multi-instrumentalist discovered progressive house music, and his life completely changed with the purchase of a synthesizer. His hobby became a profession shortly thereafter. Lake soon went from releasing much talked-about remixes to dropping dance floor bangers. “Changes” broke the Top 10 on Billboard’s Hot Dance Airplay chart in 2006, while “Carry Me Away” [featuring Emma Hewitt] dominated the same chart a year later. He followed those two early successes up with the Top 10 singles “Only One” and “If You Knew”, effectively breaking into the North American market.

Amtrac – Amtrac, real name Caleb Cornett, has been pushing his creative limits as a producer, DJ, musician and sometimes-vocalist since 2008. The multi-talented artist can electrify an audience, be it with a moving live music performance or by working dancefloors up to a sweat with his driving yet funk-filled DJ sets – it’s his mantra to be as diverse a DJ as possible, to connect with the crowd and to keep them moving at all costs. Raised in Morehead, Kentucky on a diet of deep cuts by Pink Floyd and Led Zeppelin, Caleb was lured to the dance realm by crossover acts such as The Prodigy and Chemical Brothers. Both sets of influences show on his debut LP, Came Along (2010), a 13-track adventure awash in post-punk influences and indie dance charm. From there, he branched out even further with Hey There Kiddo (2012), an all-sample opus with deep disco roots inspired by one of his favorite albums of all time, Since I Met You by The Avalanches; and The Scheme EP (2012) explores underground deep house vibes with dark, funky rhythms. Most recently he released his single “Those Days” featuring a Stevie Wonder vocal on legendary UK dance label Toolroom Records.