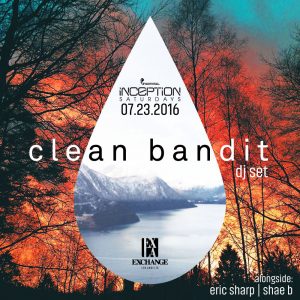 Clean Bandit – Clean Bandit is an English electronic music group founded in Cambridge, England in 2009. The band consists of Jack Patterson, Luke Patterson, Grace Chatto, and Neil Amin-Smith. Their 2010 single “Mozart’s House”, released on Black Butter Records, reached number 17 on the UK Singles Chart. In January 2014, they scored their first UK Singles Chart-topping single with “Rather Be”, a collaboration with Jess Glynne, featuring elements of both classical and dance music. “Rather Be” remained at the top of the chart for four weeks. In 2014, they achieved their first US top 10 single with “Rather Be” peaking at number 10 on the Billboard Hot 100. In 2015, “Rather Be” won the Grammy Award for Best Dance Recording.