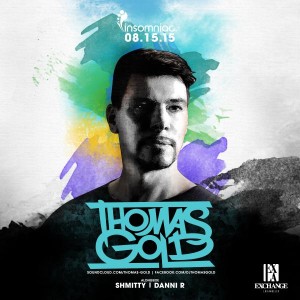 Thomas Gold – Call it the Gold standard. There’s simply no other way to measure the staggering success that Thomas Gold has achieved in dance music, consistently obliterating boundaries and defying convention with chart-topping tracks and jaw-dropping performances across the globe. Since storming onto the scene in 2006, the German artist has emerged as one of the most widely admired producers in modern dance music. Gold quickly caught the attention of such premier labels as Toolroom Records, Phazing, Spinnin’ Records and Size Records, while working with the likes of Fatboy Slim, Axwell and Dirty South. Gold’s rare ear for remixing acclaimed artists has also helped elevate his name into rarified air. His breakout remix of Adele’s “Set Fire to Rain” eclipsed 15 million YouTube views, while his reworks of industry icons like Lady Gaga, OneRepublic and Miike Snow continue to dominate dance floors worldwide.

Shmitty – “Anyone can play a familiar track that’ll make the crowds go crazy. The challenge is finding a sound that no one knows and evoking the same reaction.” It’s this challenge that fuels Shmitty’s never-ending chase for the perfect sound. The Los Angeles-based, Netherlands-born producer/DJ combines funktion and form with style, taste, and class; he mans the decks like a sniper at the watchtower, with house and techno as his artillery. A chameleon onstage, shifting from groovy down-tempo to cultish techno, he covers the full spectrum of true house music. With a deep knowledge of the history of electronic music and with a direct mainline source to the current music landscape, Shmitty melds past and present in all his meticulous sets, which have allowed him to share the stage with a diverse roster of dance music titans, including A-Trak, Claude VonStroke, Dash Berlin, Cosmic Gate and countless others. The stage is his first home, having performed at some of the top venues and music festivals across the US, including Escape from Wonderland and the Hollywood Palladium, as well as Los Angeles nightclubs Create and Exchange LA, where he holds a double residency.