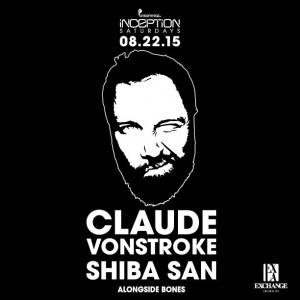 Claude VonStroke – In this day and age of music cross-pollination, Claude VonStroke sits at the forefront of all that is good, proper, and most importantly, fun. He’s just as at home remixing Kenny Larkin or Rihanna as he is dropping multiple underground hits. DJ-wise, his relentless touring of every major city, festival and, basement after-party around the world has only enriched this unique perspective on music. Raised in Detroit and now based in Venice Beach, Barclay Crenshaw created the quirky alias “Claude VonStroke” in 2005 and went on to become one of the most well-respected label owners and DJs in dance music. His first release, ‘Deep Throat’ was a hit, putting his imprint on the decks of DJs around the globe. But the real breakthrough came with double-header ‘The Whistler/Who’s Afraid of Detroit?.’ The 12” cemented Claude’s reputation as a producer to be reckoned with, crossing borders, genres, and musical ears, and is now known as one of the classic dance releases of the decade.

Shiba San – In recent times Shiba San has garnered a lot of positive attention from every corner, with one foot in his hip hop past and the other embracing the future of house he has found a comfortable collision of the two in bass heavy ghetto funk. And associations with both Claude Von Stroke’s Dirtybird label and AMINE & Dance’s Cuff certainly haven’t hurt. His recent release “Okay” effortlessly became a contender for our 2014 summer soundtrack, and it’s currently making some serious rounds on the club circuit, shooting straight to the top on Beatport’s House chart and coming in at numero 3 on the overall rankings provides – a clear indicator of the power behind this low slung rumbler. As if hearing the track yourself wouldn’t confirm that!