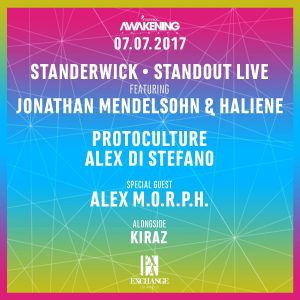 Standerwick – It has been quite the compelling story for this once described ‘enigmatic’ music producer and DJ from Bristol in the United Kingdom, but there is nothing mysterious about the success STANDERWICK has achieved inside the world of Dance Music to date and in such a short space of time. From his early years in song composition stemming from a professional song writing background with Zomba Music Publishing over 2 decades ago, his decision to move from writing Rock Music to Electronic Dance Music was a decision well made. STANDERWICK has had a blistering track record in recent years which currently stands at 5 Beatport Trance No.1’s, 15 Top 5’s and 6 Top 10’s. He is also ranked as the 9th best-selling Trance producer on of all time (Beatstats Jan17) and currently the No.1 Selling Beatport artist in the last 3 months which is all remarkable considering this has been achieved in just over 4 years. His familiar style of production has seen him remixing tracks for Armin van Buuren, Markus Schulz, John O’Callaghan amongst numerous other high profile artists with his remix for Gareth Emery Ft. Wayward Daughter ‘Reckless’ being voted as the 2nd best track of 2016 by the listeners of Armin van Buuren’s, A State of Trance radio show.