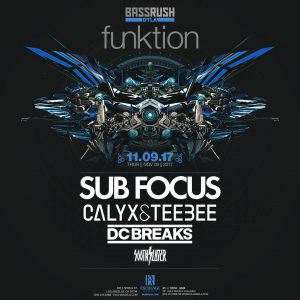 From hearing one of his tracks for the first time inside a club in 2003 (‘Strobe’, rewound twice by Andy C at The End) to headlining Glastonbury in 2010 (Saturday night on the fabled Glade stage to a rapturous reception), Nick Douwma’s rise through the ranks of underground jungle to become a major player in electronic music has been nothing short of spectacular. Initially known for air-punching, dancefloor dismantling drum & bass, Sub Focus has now become synonymous with music that draws from all corners of the electronic landscape, and has come to epitomise the ‘anything goes’ mantra of todays flourishing dance scene. London born and bred, Douwma’s rise into the furthest reaches of the dance music stratosphere began when he first encountered jungle, at high school in the mid-Nineties. A friend played him a cassette featuring General Levy’s hit ‘Incredible’ and Douwma, at that point playing bass in a rock band, was completely taken under it’s spell. Shortly after this first introduction, The Prodigy – who were beginning to meld rock and dance music in new and exciting ways – also became a massive influence and the young Sub Focus began to lose interest in his studies and started spending more and more time in his bedroom in Holloway, creating music. His ascent turned onto a steep axis, when in 2003, he signed his first tunes to d&b’s biggest label Ram Records, off the back of a CD:R handed to label boss Andy C by one of his friends whilst drunk. Despite this inauspicious introduction, so impressed was the legendary DJ by the music on it, he duly signed every track and invited Douwma to join the Ram family. Sub Focus’ tunes – expansive, fiercely creative, but made with the scientific precision of a military warhead – immediately stood out from the crowd and were soon being rotated by every major DJ in the scene, garnering airplay on mainstream radio, and drawing fans from throughout the globe. Singles like ‘Airplane’, ‘X-Ray’ (which reached number 60 in the national charts) and an all-conquering remix of The Prodigy’s ‘Smack My Bitch Up’ meant that by 2007, Douwma was one of the biggest names in drum & bass. The next logical step was an album. But as he’s shown throughout his short career already, Douwma wanted to push himself further and create something that was more encompassing than the often insular confines of drum & bass. Drawing on his love of all strains of dance music, from 80s synth pioneers Vangelis and Jean Michel Jarre, through dance leviathans The Chemical Brothers, to futuristic house and techno acts like Lindstrom and Matthew Dear, his eponymous debut album released in 2009 featured not only drum & bass but dubstep, old school breakbeat, bumping house and lashings of electro and rock, all brought together in a taut collection that could only have been made in the 21st century. It was an instant hit. The monstrous, Daft Punk-influenced album opener and first single ‘Rock It’ broke into the Top 40, with second single ‘Could This Be Real’ doing similar damage. The stunning ‘Splash’, featuring the vocals of Coco Sumner soon followed, and due to insatiable demand Douwma was called in to remix the likes of Deadmau5, Empire of the Sun and Dizzee Rascal by the end of 2009. The walls and boundaries that once separated the different areas of dance music for so long have seemingly disappeared in the Noughties, destroyed by a new generation of clubbers and producers who are creating and consuming music in a completely different way. Sub Focus’ sound is the perfect reflection of this, with all categories of electronic beats brought together into a luminous, cosmic melting pot. He recently co-wrote and produced the track ‘Kickstarts’ for UK solo artist Example, which peaked at number 3 in the national charts, and he has also transferred his debut album into a stunning live show, playing festivals throughout the world, joining Pendulum on tour, and in 2010 wowing the revellers at Glastonbury. The unforgettable show on the Glade stage was in many ways a conclusion to the first chapter in Sub Focus’ story. He has conquered drum & bass, created a ground-breaking, era-defining album, and has brought new school dance music further into the mainstream spotlight thanks to his unmissable live show. Douwma is already hard at work creating his sophomore long player, and given his track record thus far, it may well revolutionize dance music all over again. But then, would you expect anything less?

To drum & bass fans the world over the names Calyx and TeeBee are synonymous with high quality, perfectly sculpted music. Just as Michelangelo discovered statues in blocks of stone, so Calyx and TeeBee discovered the essence of D&B locked away in studio equipment; always forward-thinking and packed with as much integrity as energy; their music has had an impact on the scene for over fifteen years. While Calyx & TeeBee’s first collaborations emerged in 2004, their history and friendship dates back to 1998 when they were introduced as label-mates of the legendary Moving Shadow imprint. In the following years the two artists accumulated astounding solo back-catalogues of releases on a glittering array of D&B’s most respected labels. When Calyx and TeeBee finally decided it was time to work together in the studio, the first tracks they produced (‘Follow The Leader’ and ‘Cyclone’) were highly acclaimed by the music press. Both tracks featured on Calyx’s debut album ‘No Turning Back’ and were picked up by Rockstar who used them as the soundtrack for a global TV campaign advertising the colossal ‘Midnight Club’ computer games series. Following this huge joint success Calyx and TeeBee produced one of the landmark releases of 2006: ‘The Quest’ released on TeeBee’s renowned Subtitles label. In the same year the pair also penned ‘The Shape Of Things To Come’ for Renegade Hardware’s 10 year anniversary album before deciding to embark on the long journey of producing a collaborative album. Now officially a duet, Calyx & TeeBee launched Momentum Music which marked its first release with their debut long player.  The ‘Anatomy’ LP proved to be one of the most highly anticipated albums in D&B for years, gaining massive support from the scene’s big players and topping sales charts for months. ‘Anatomy’ set a whole new agenda. Following its release, Calyx & TeeBee decided to embark on non-stop tours across the globe, venturing into their now legendary and consistently in-demand joint DJ sets sporting 6 decks and 2 mixers with both players in action simultaneously. The impact of their unique performances fed back into the studio, evolving their sonic signature once again in 2012. After signing exclusively with the mighty Ram Records, they delivered their long-awaited sophomore album ‘All Or Nothing’: a kaleidoscopic array of music that sideswiped the scene with its jaw-dropping showcase of creations and collaborations. Five years in the making, this game-changer repped Calyx & TeeBee’s extensive range and abilities at a whole new level. The ensuing barrage of radio play and press exposure took the duo’s profile to unprecedented levels; with countless requests for high-profile remixes and a never-ending schedule of festival appearances, both their following and overall reputation reached an audience that transcended the genre. The pair ended an amazing year with an avalanche of wins at the most respected awards ceremony in drum & bass: The Drum&BassArenaAwards. Home to the most dedicated and discerning fans on the planet, the brand’s community voted its leading single ‘Elevate This Sound’ (the first track that Calyx ever recorded his own vocals on) for Best Single and the second single ‘Pure Gold’ won Best Video. The duo were also recognised with the most coveted trophy possible: Best Producers. Adding to this gold-rush momentum, the duo were also shortlisted in BBC Radio1’s Top 5 best Essential Mixes of 2012 – a moment of scene history, it’s the first time a drum & bass artist’s Essential Mix has ever achieved such recognition. As ‘All Or Nothing’ continues to develop a life of its own, having spawned massive singles such as ‘Strung Out’, ‘Elevate This Sound’, ‘Pure Gold’ and ‘Scavenger’; the duo can be found either deep in the studio working on their next releases or at the world’s most respected drum & bass events, massaging the masses with their intricate six-deck sermons. More forward-thinking and packed with as much integrity and energy as ever, their music continues to have a peerless impact on drum & bass… and beyond!

Drum & Bass duo DC Breaks have made their way onto the widest range of playlists. Their hardcore club cuts have been rewound by the likes of DJ Friction and Andy C. On the other hand, the songwriting ability displayed on the single ‘Faithless’, featuring Bianca, has plastered them all over the radio. That’s just the tip of a very large iceberg. DC Breaks have earned their stripes in the underground but, with an album due in the Autumn and a packed festival season ahead, they’re about to explode onto the international stage in a spectacular fashion. Since signing to Andy C’s Ram Records they’ve carved a reputation for delivering world class remixes for some of the biggest names in pop. Their work on singles by Paloma Faith, Lady Gaga, Lana del Rey, Tinie Tempah and others, and production for Example (a cut on the ‘Playing in the Shadows’ album) woke the pair up to the possibilities offered by vocalists. It was the start of the journey that led to the forthcoming album, packed with crossover cuts such as the piano-led ‘Breathe’ featuring Dave Gibson, with its contagious, urgent chorus. Or the soulful explosion of ‘No One Like You’ sung with passion by Niara Scarlett. Or the epic blast of ‘Salvation’ wherein DC Breaks take heavy duty bass sounds and tie them to uplifting, irresistible vocal hooks. Once they graduated to Ram itself, with monster cuts such as ‘Shaman’ and last year’s battering ‘Lock-In’, they hit the drum & bass A-league. Before long it wasn’t just the drum & bass scene paying attention. DC Breaks tunes made it onto BBC Radio via Zane Lowe, Mistajam and Annie Mac.