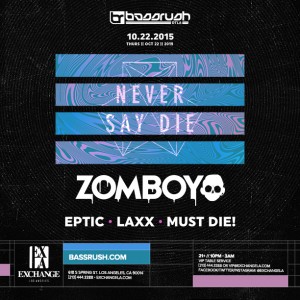 Zomboy – Zomboy has had an explosive few years since making the transition from his sound engineering background into full-time music production, and his dynamic rise to global recognition has been quite something to watch. Citing early inspiration as Skrillex, Reso and Rusko, his first EP upon signing to Never Say Die Records ‘Game Time’ smashed the Beatport charts and led to the likes of Ministry of Sound and Warner Music snapping up several of his other tracks for various compilations. Constantly developing his unique sound, Zomboy has gone to create numerous remixes for artists such as DJ Fresh and Flux Pavilion, clocking millions of views on YouTube and causing an ever-increasing demand for his DJ sets across the world. Last year saw his track ‘Here to Stay’ ft. Lady Chann destroy the Dubstep charts both on iTunes and Beatport and a subsequent remixes EP featured the likes of Buku, Delta Heavy, Astronaut and Jumo Daddy. 2013 has seen the triumphant return of Joshua Mellody – dividing up his eagerly awaited ‘Reanimated’ EP across both Never Say Die Records and No Tomorrow Recordings. He says of the Beatport Number 1 – “The two halves each have their own distinctive sound, but together they are a cohesive fit.”