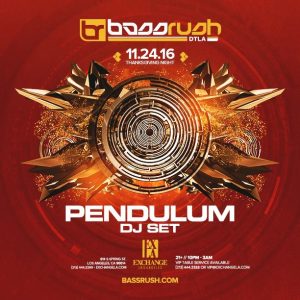 Pendulum – Formed during 2002 by three musicians from Western Australia with similar visions and musical backgrounds, Pendulum’s mission has always been to pull together their production resources, ideas and influences from various styles of music, to create a new sound that they felt was missing from dance music. The individual members behind Pendulum had been active in Perth’s live music scene for several years: producer / vocalist / keyboardist Rob Swire and producer / bassist Gareth McGrillen played together in the acclaimed Perth band Xygen, while Paul ‘El Hornet’ Harding was a veteran of the Perth DJ scene.