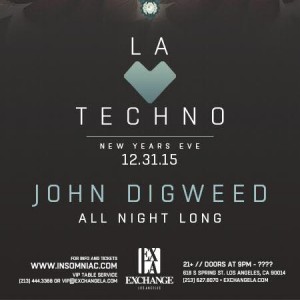 John Digweed – Some DJ careers are built on hype. John Digweed’s career is built on substance. One of the planet’s most popular DJs, his sets never fall out of favour with clubbers the world over, as his relentless global gig schedule testifies. From ethereal, swirling cinematic soundscapes to energy-infused bass-bothering tech growlers, a new generation of clubbers are learning what we already know – that there’s nothing quite like being locked into a John Digweed set. But John Digweed is much more than a DJ. Bedrock – his record label, promotions company and production partnership with Nick Muir – is a mothership of creative ingenuity and integrity that other labels orbit around. His vision for the Bedrock record label has been realized over 12 years, as he continuously seeks out mixes and remixes from the world’s best producers. Techno mainstays like Marco Bailey, Christian Smith and John Selway sit comfortably alongside hot new talent like Guy J in the Bedrock camp.