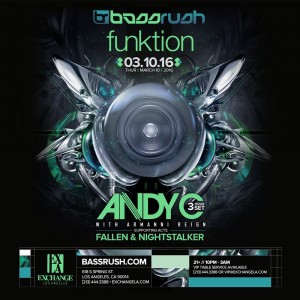 Andy C – With 40+ awards to date, DJ sets that see him play mainstages from EDC to Global Gathering, and a reputation as the go-to remixer for the likes of Major Lazer, Rudimental, London Grammar and beyond, Andy C’s list of achievements grows by the week. A reputation as one of the most significant British artists in global dance music has been hard earned, but it’s hard to place the tipping points. Was it his performance at Radio 1’s Hackney weekend, where his set was watched online by more people than either Jay Z or Rihanna? When he performed to 85,000 people at Glastonbury in 2013? Or when his remix of Major Lazer charted on iTunes after being added to the Radio 1 Playlist? Andy’s success and status as a festival main stage headliner and DJ who guarantees sell-out roadblocks are driven by a phenomenal work ethic and the kind of tour schedule that makes rock bands look like part-timers. Recognized as a cover star by both Mixmag and DJ Mag (he also won the latter’s Best British DJ Award 2013), he recently sold out London’s Electric Brixton in a matter of days. His eagerly awaited Nightlife 6 compilation ran riot across iTunes dance compilation chart and hit No.1 on Beatport. Zane Lowe and Annie Mac gave his equally anticipated new original productions, ‘Haunting’ and ‘Workout’, pride of place on their Radio 1 shows, which in turn followed a special programme on Radio 1 dedicated to Ram Records itself.