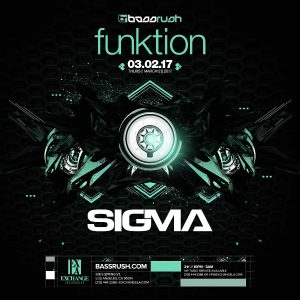 Sigma – Sigma are DJ and production duo who have now sold over 3 million singles, with 4 hit records (2x OCC No.1s, 3 iTunes No.1s) and 2 platinum awards to date. They’ve received 2 Brits nominations, sold out their debut live tour, and played festival main stages across the world with performances including Glastonbury, Bestival, Reading & Leeds, V, T In The Park, Creamfields, SW4, EDC, Pukklepop, Sziget and beyond. They’re also the only drum & bass outfit to have performed at the BAFTAs ceremony one night, and a warehouse rave the next.

Sigma met at university while balancing raving and studying when Joe, who started learning the violin aged 3, swapped his strings, drums and keyboards for a pair of decks in his early teens, becoming a former DMC UK Champion scratch DJ when he was just 16, started DJing at the nights that Cam was promoting in Leeds.