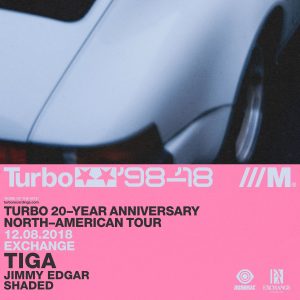 The origins of Montreal born DJ-producer-incipient Teutonic legend Tiga lie to the vague and troubling East, where he was weaned on the nefarious milk of the notorious 1980s Indian club scene. “To the unforgiving eye,” he says of the sybaritic night-kingdom, “a world of filth and decadence is revealed. For example, I’m fairly certain that more than a few club owners had an unsavory arrangement with the man who brought the folding chairs. I was at once appalled and enraptured. After that, I had no choice in the matter.”

By 1990, Tiga had returned to Montreal, prodigiously night wise and unsatisfied with the existing local club scene (calling it “the plumage of a bird I cannot bring myself to want.”) With the help of a core group of friends, he began to throw a series of small parties infused with the sense of dead-eyed ennui gleaned from a past littered with acid whores and crazed Indian gamblers. Other innovations which Tiga introduced to Montreal party culture include guest DJs, intense street promotions featuring rival gangs of street acrobats, color flyers, multi-dj sets, and leading the supplicant crowd through the innermost corridors of one’s soul.

Sonically, he’s fluent in a myriad of vernaculars, from “software as music” and glitchy underground Hip Hop to his signature glossy, erotically charged robot funk. Visually, he’s established himself as an in-demand director, photographer, and multimedia artist with an impressive roster of videos, exhibits, and magazine work to his credit.

Born in August of 1983, Edgar was playing drums, keyboards, and saxophone, as well as experimenting with sound manipulation by the time he was an adolescent. To complement to his technical prowess, Edgar learned to play piano and “feel the music” in Detroit’s Baptist churches. By the time he was 15, with help from a promoter friend, Edgar was spinning alongside hometown legends Atkins, May, and Saunderson in local strip clubs and raves. His early exposure to music, technology, spirituality, and seduction informed Edgar’s creative impulses profoundly, and their confluence has become a recurrent motif in his work.