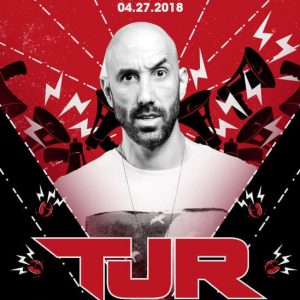 TJR (real name TJ Rozdilsky) has built a formidable catalogue of remixes and original tracks since broadening out from his acid house and techno roots in 2008. He has consistently been cooking up big room bangers that have received massive support from prominent DJ’s around the world. Originally from the little state of Connecticut, a move to Los Angeles in 2010 saw him embracing the benefits of the United States’ hot spot for electronic dance music.

He first gained exposure as a promising newcomer to the electro/fidget house scene. Combining his love for grimey analog bass, chugging techno grooves, and quirky vocal samples, he began crafting a refreshingly new cross-over sound. It was kicked off with the “Bass is the Place EP” released on Lee Mortimer’s Wearhouse Music which included tracks “Sonic Chronic” and “Atomic”. Since then he has added several original tracks to his arsenal, like “Booty Move” (Jack Union), “This World” (Jack Union), “Good Evening Chicago” (Potty Mouth Music), “I Don’t Know Where” (Potty Mouth Music) which all climbed high on the beatport charts.

What makes TJR’s live sets special is his capacity for diversity, blending together a plethora of energy and different genres into his main room sound. Competing and winning DJ battles was the main influence behind this style that involves creative mixing and impromptu scratching. TJR has performed throughout the United States and Canada, and has amassed an impressive event resume.

With upcoming releases, remixes and worldwide support from the likes of Fatboy Slim, Calvin Harris, DJ Dan, LA Riots, Donald Glaude, Hijack, Santiago & Bushido, Electric Soulside, Hatiras, Will Bailey, and Calvertron, we can safely say TJR has positioned himself amongst the finest.