Filed Under: Other Tagged With: DJ Slink, Havoc, Just Blaze, The Yost Theater 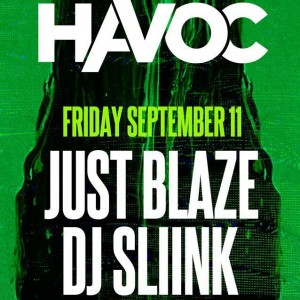 Just Blaze – Justin Smith (born in Paterson, New Jersey on January 8, 1978), better known as Just Blaze, is an American hip hop music producer from Paterson, New Jersey. Blaze is also the CEO of Fort Knocks Entertainment. As a child, Smith grew up in Paterson, New Jersey. When he was younger, he developed an interest/love in music. Smith was highly influenced by his older cousin, who introduced an EPMD record to him. As he got older, his interests turned more to the production side. He attended Rutgers University for three years before dropping out to pursue his dream of producing music. Smith began producing for well known musicians in the late 1990s. This production would earn him a spot on Jay-Z’s The Dynasty: Roc La Familia. His production on this album, along with the work of Kanye West earned them both jobs as in-house producers at Roc-A-Fella Records. His production work earned him the name Just Blaze, which would become his production name. Smith then went on to produce for many of the acts signed to the Roc-A-Fella roster. In 2002, Just Blaze became a household name for the production of Cam’ron’s summer smash “Oh Boy.” Smith went on to produce for Snoop Dogg, Shawnna, Usher, Mariah Carey, Kanye West, Talib Kweli, Busta Rhymes, Jadakiss, Memphis Bleek, Cam’ron, Saigon, Young Gunz, Grafh, Beanie Sigel, The Game, DMX, T.I., Fat Joe, Juelz Santana, Rhymefest, Ghostface Killah, Jin, Fabolous, Freeway (rapper), Joe Budden, MF DOOM, Kool G Rap, Rah Digga, Teriyaki Boyz, Edison Chen, and big UK MC’s JME, Skepta and Klashnekoff. He also produced an urban remix of the Janet Jackson single ‘Just A Little While’ entitled ‘Love Me.’ After the retirement of Jay-Z in 2004, Just Blaze decided to create his own label. Initially, he went to Roc-A-Fella with the idea, but they could not afford to grant a vanity label at the time, due to the Dame Dash split. Just then went to parent company Def Jam Recordings, who was not willing to take such a big risk on a pet label. Finally, Atlantic Records agreed to give him a label to be 50% owned by them. He would name the label Fort Knocks Entertainment. In 2004, Just Blaze launched Fort Knocks Entertainment through Atlantic Records. He would go on to sign New York mixtape rapper Saigon. In 2007, the label released Saigon’s debut mixtape “The Moral of the Story.” Saigon’s first album is tentatively titled “The Greatest Story Never Told. The label’s next release will be a compilation entitled “Just Getting Warm”. Most recording for Fort Knocks takes place at Baseline Studios.