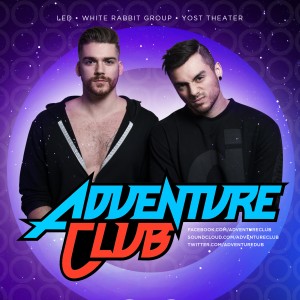 Adventure Club – Adventure Club is a Canadian electronic dance music duo composed of Christian Srigley and Leighton James, based out of Montreal, Quebec. The duo formed while attending high school in Montreal as a hardcore pop-punk band, but later decided to move onto the more electronic sound of electronic dance music (EDM) after simply getting bored with the pop-punk sound. The first song to put the duo on the map was their remix of the song “Daisy” from the studio album Daisy (2009) by the American alternative-rock band Brand New, which was put on The Hype Machine, an MP3 blog aggregator website. The duo’s signature sound includes high-pitched female vocals with electronic sounds and heavy drops. Through online social network sites, the duo were able to reach new levels of exposure by getting their first music video on the UKF Dubstep’s YouTube channel. As of November 2012, the music video to the remix of “Everything to Me” by LIPS has over 2 million views. The duo is signed under the management team of The Standard Group. The duo has toured across North America, as well as parts of Europe and Australia and have played at various music festivals including the American Electric Daisy Carnival in Las Vegas, Nevada. They also made their first appearance at the Ultra Music Festival 2013 in Miami and also played at the Ultra Music Festival in Seoul, South Korea in June 2013.