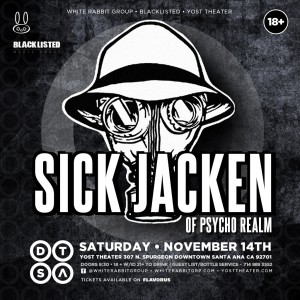 Sick Jacken – Tragedy and Triumph…Two sides of the same ever-spinning coin that rules the game of life. No man can predict when or on which side the coin will land, and peoples’ wildest dreams and worst nightmares come to life with its every flip. Life’s winners are those resourceful individuals who manage to turn tragedy into triumph. The members of Los Angeles super-group Psycho Realm are no strangers to struggle. Sick Jacken with the aid of Cynic (Street Platoon) and DJ FM (Sick Symphonies) emerge as a shining example of solidarity and success against almost insurmountable odds. Critically acclaimed Los Angeles Hip Hop group Psycho Realm was started by brothers Sick Jacken and Duke in the late 90’s. The group was discovered by Cypress Hill’s front man B Real and was signed to Ruff House/Colombia Records where they released their self-titled debut “The Psycho Realm” in 1997. Over the years the Realm continued on, releasing, two more Psycho Realm albums: “A War Story Book I” in 2000, “A War Story Book II” in 2003, Street Platoon’s debut album “Steel Storm” in 2001, Sick Symphonies present: “The Terror Tapes” in 2006, “DJ FM’s Street Mixes”, and on 9/11/2007 released another classic when Jacken teamed up with DJ Muggs of Cypress Hill to deliver DJ Muggs Vs Sick Jacken Feat Cynic “Legend Of The Mask & The Assassin” which has sold 30,000+ units to date on Jacken’s RMG/Universal imprint.