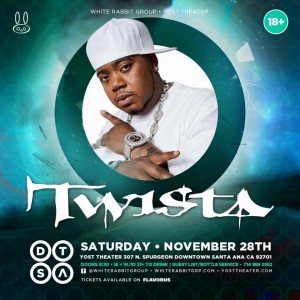 Twista – Life’s best surprises often come from unlikely places. Twista knows this better than most. The pioneering platinum rapper put Chicago on the rap map and made the double-time rap style a rap staple. Despite selling millions of albums and popularizing a delivery incorporated by everyone from Jay-Z to Eminem, the Windy City rapper remains largely unheralded by the uninformed. That’s why he’s named his new album The Dark Horse. Twista became even more popular in 2003 and 2004 when he teamed with fellow Chicagoan Kanye West and Jamie Foxx for the smash single “Slow Jamz.” Twista’s 2004 album, Kamikaze, earned him his first platinum plaque. Since then, Twista has remained one of rap’s premier practitioners and in-demand collaborators. He’s appeared on albums from Mariah Carey, Pitbull and Jay-Z, among others, and released a string of acclaimed albums and mixtapes. But for Twista, it all comes down to the music. It’s the reason he’s remained one of rap’s top talents for two decades. “It’s the love of the music,” he says. “I do other things and I have other business ventures that I do, but my love is really with the music. I keep doing it and staying in it because I love music. I still get excited every time I hear a beat or think of a different flow.