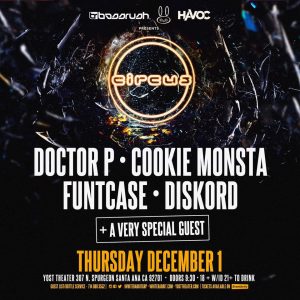 Doctor P – Doctor P is the stage name of the English Dubstep record producer and DJ, Shaun Brockhurst.He is the co-founder of Circus Records, along with Flux Pavilion, DJ Swan-E and Earl Falconer.To make music is one thing – but to change the course of a genre is another! Doctor P is definitely the leader of the new wave of wobbles and whomps in dubstep and goes against the normal ingredients needed.
[soundcloud url=”https://api.soundcloud.com/users/8847709″ params=”auto_play=false&hide_related=false&show_comments=true&show_user=true&show_reposts=false&visual=true” width=”100%” height=”450″ iframe=”true” /]

Cookie Monsta – Known for his infectious, minimal, woofer-pumping brand of dubstep, Nottingham, U.K. producer Tony Cook became Cookie Monsta in 2008. He began messing around with music by programming songs on the Playstation video game Music 2000 (known as MTV Music Generator in the United States), and while he would toy around with the idea of making tunes for the next few years, it was hearing the bright melodies and speaker-ruining bass of artists like Rusko that influenced him to push it harder. In 2008, he took the name Cookie Monsta and unleashed the mixtape Maryland Chocolate Chip Mix, which featured hard beats, low bass, and clever titles like “Ginger Pubes” and “Stinky Ferret.” The songs “I Know Jujitsu,” “Blurgh!,” and “Fixed Penalty! I Was Like Rah!” appeared on his 2009 mixtape Wheres My Cookie…?, and in 2010 fellow producer Flux Pavilion would help influence the rising Cookie Monsta to sign with Circus Records. The label would release his Riot! EP in 2012, with the single “Yow Momma” following in 2013.
[soundcloud url=”https://api.soundcloud.com/users/364118″ params=”auto_play=false&hide_related=false&show_comments=true&show_user=true&show_reposts=false&visual=true” width=”100%” height=”450″ iframe=”true” /]