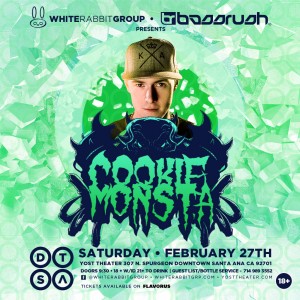 Cookie Monsta – From a very early age Cookie Monsta was always into music. From around 11 years old a PlayStation game called ‘Music 200’ caught his eye and that’s where it all began. He would play on this game making loops, playing on it for ages. Then around 17 he had as many music games he could find, but he wanted more. Cookie Monsta never really knew about music production and came from a group of friends that were not into that sort of thing. When he applied at college he was frowned upon for doing this simply because people thought music was pointless to study. He first opened up Reason 3 in September 2007 and the first ever Dubstep tune he heard was Midnight Request line from Skream, He never knew it was Dubstep, but he loved it even though none of his friends did. Then hearing all the upbeat and darker side of Dubstep made Cookie Monsta get into it completely and ever since then he has been expanding his knowledge of Reason 4 by religiously using it as much as he could. A lot of people ask him for tips and tricks for producing but the best bit of advice, according to him is, ‘If you’re passionate about making music and you know you want to make music then knuckle down and stay on it. If people doubt you carry on, no matter how bad things get. Music isn’t my hobby, it’s my life’. A true word spoken by this future talent.

Definitive – Rising through the ranks of the Socal Bass music scene, one duo has stood out as a force to be reckoned with. Definitive, comprised of Alfonso Lopez & Billy Marples have established their brand of bass music mayhem in 2013 and have not looked back since-Quickly gaining notoriety for releases on respected labels such as Savage Society, Prime Audio and Chronos Records. As a collective they represent a diverse range of genres including dubstep and dancefloor Drum and Bass. Proving themselves on the decks and in the studio, with the support of key players in the bass music scene such as 12th Planet, FuntCase and Cookie Monsta, Definitive continues to be an act to watch.