Filed Under: Other Tagged With: DTSA, Shmitty, The Yost, The Yost Theater, White Rabbit Group, Will Sparks, WRG 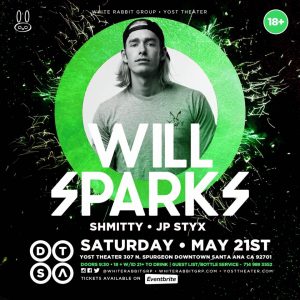 Will Sparks – At 23 years young, Will Sparks has cemented his position at the forefront of the globally loved Melbourne sound. Countless original productions have spent weeks inside the Beatport top 10 in addition to signature remixes of global hits such as Major Lazer’s ‘Be Together’, Robin Thicke’s ‘Blurred Lines’ and The Chainsmokers’ ‘Selfie’. In his home country he was voted ‘Breakthrough Artist Of The Year’ only to be named the #1 DJ in Australia just 12 months later – fast forward a few years and Will has been listed as #78 in the DJ MAG ‘Global Top 100 DJs’. Now expanding his horizons, Will Sparks is spreading like wildfire with recent festival appearances on some of the biggest stages in the world including Tomorrowland, Stereosonic, TomorrowWorld and EDC as well as touring from continent to continent, 11 months of the year and hitting the 650k Facebook fans milestone. Since his genre-defining track, ‘Ah Yeah!’ hit #3 on the Beatport overall charts at the tail end of 2012, Will Sparks has become unstoppable, hit after hit. Producing original tracks like ‘Catch’, ‘When The Lights Go Out’ and ‘This Is What The Bounce Is’ he garnered the attention of global heavyweight dance label Ultra Records. In the past 3 years alone, he has seen more achievements than most artists see in an entire lifetime.

Shmitty – It’s this challenge that fuels Shmitty’s never-ending chase for the perfect sound. The Los Angeles-based, Netherlands-born producer/DJ combines funktion and form with style, taste, and class; he mans the decks like a sniper at the watchtower, with house and techno as his artillery. A chameleon onstage, shifting from groovy down-tempo to cultish techno, he covers the full spectrum of true house music. With a deep knowledge of the history of electronic music and with a direct mainline source to the current music landscape, Shmitty melds past and present in all his meticulous sets, which have allowed him to share the stage with a diverse roster of dance music titans, including A-Trak, Claude VonStroke, Dash Berlin, Cosmic Gate and countless others. The stage is his first home, having performed at some of the top venues and music festivals across the US, including Escape from Wonderland and the Hollywood Palladium, as well as Los Angeles nightclubs Create and Exchange LA, where he holds a double residency. On the stage and in the studio, Shmitty dominates his craft. You’ll hear it in his sets. You’ll feel it in his music. And when you do, you’ll be in for a ride.