Filed Under: Other Tagged With: Cazzette, DTSA, The Yost, The Yost Theater, White Rabbit Group, WRG 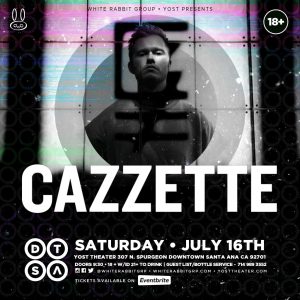 Cazzette – Cazzette may have been part of the Swedish EDM explosion of 2012, but they quickly distinguished themselves from Dada Life, Swedish House Mafia, and the rest of the competition when they announced their official debut would be the first ever released exclusively on a streaming music site. Members Sebastian Furrer and Alexander Björklund were two Stockholm producers who joined forces in 2011. After meeting manager Ash Pournouri, the three combined two of the favorite strains of dance music — dubstep and house — for a sound they called “dubhouse.” Bootlegs of Swedish House Mafia and Kanye West tracks introduced their dubhouse to loyal EDM fans, and through Pournouri, they were able to bring this sound to the masses when they made their official debut in 2011 with a remix of Avicii’s single “Sweet Dreams.” They were signed by Avicii’s and Pournouri’s management company, At Night Management, that same year and hired to do an official remix of Swedish House Mafia’s “Save the World.” Released at the same time, their bootleg remix of Adele’s “Set Fire to the Rain” was nearly as significant, climbing to number one on Hype Machine‘s chart of trending downloads. Gigs at XS and Surrender in Las Vegas, Ushuaia in Ibiza, and Radio City Music Hall in New York City followed, along with main stage slots at festivals like Creamfields, Ultra, and Tomorrowland.