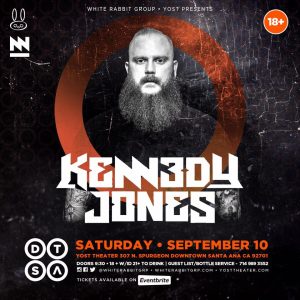 Kennedy Jones – From festival stages to sold out nightclubs, Kennedy Jones quickly made his mark on the dance music movement. Incorporating elements from all of his favorite styles of music, coupled with his exceptional lyrical ability, the Never Not CEO managed to become not only one of the most versatile producers in electronic music, but one of the most entertaining live performers as well. With overwhelming support from some of the biggest names in the game, from Skrillex, Diplo, Major Lazer, and Borgore, to Carnage, 12th Planet, Ookay, Brillz, Bro Safari, Mt Eden, Just Blaze, and more, Kennedy Jones is continuing to show the world that his high-energy, bass-fueled, twerk-enducing production, is changing the performance landscape for good. Kennedy has shown his ability to not only hang with, but at times even out-pace the biggest names in music today. On the other side of the genre spectrum, his radio-supported remix of Katy Perry’s “Roar” (Kennedy Jones LOUDER remix), multiple Hip Hop releases, hard dance anthem “No Return” and original hit “INTL” have shown the world that Kennedy isn’t just a one-trick-pony. Branching out into genres like Hard Dance, Rap, Big Room House and more, Kennedy Jones has used every platform he’s stepped on, including electrifying performances at EDC Las Vegas, Escape from Wonderland, Electric Zoo, Paradiso Festival, Shambhala, and the Marquee Las Vegas to name a few, to show us just how musically diverse he really is with no intentions of going away anytime soon.