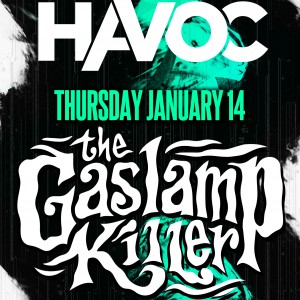 The Gaslamp Killer – Resident Advisor described his shows as “the epitome of unhinged energy. Rock, jazz, bass music and funk are just as likely to be aired as hip-hop, as he wigs out with his now trademark dance moves.” Maybe you caught the aforementioned dance moves in the Apple commercial that aired during the 2015 Grammy’s. Or maybe you caught him at any number of the biggest international or US festivals. Over the last several years, GLK has amassed a new arsenal of weapons. Once primarily known for his atomic live sets and hypnotic mixes, he’s evolved into a singular auteur. He can produce for himself and others, both on-stage and in the studio. Watching him conduct a live band recalls the frenetic genius of LA Philharmonic maestro, Gustavo Dudamel. The beautiful chaos is best distilled on his live album: The Gaslamp Killer Experience: Live in Los Angeles. Seamlessly fusing his eclectic tastes, his original music and blends transport listeners on a psychedelic journey. Recorded in late 2012, his BBC Essential Mix binds Radiohead and Dilla, the LA Beat scene and Black Sabbath, Ennio Morricone and Andre 3000. His debut full-length, Breakthrough merges acid rock and dirty beats, celestial Turkish strings and filthy hip-hop drums. Pitchfork bestowed lead single “Flange Face,” with Best New Track honors, branding it one of the heaviest bangers of the year.