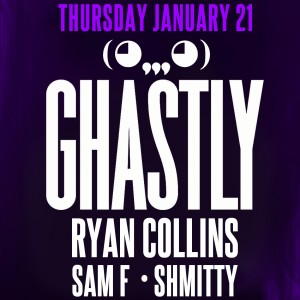 Ghastly – After entering the music scene and practicing his talents with touring metal bands such as The Irish Front, David Lee Crow finally found his calling with dance music, and it inspired him to pack up and head to Venice Beach, California to live out of his van and pursue a new career in bass-heavy music. It didn’t take long for him to find his place in the scene, as Ghastly quickly claimed himself a position as Bassrush Resident DJ at Exchange LA, and has also secured a number of releases on chart-topping labels such as OWSLA, Buygore, and Dim Mak to name a few. Ghastly’s approachable yet hard-hitting style ushers a forward-thinking dynamic that is not often seen in today’s saturated scene, and his solo productions and collaborations present an unequivocal level of determination and finesse that fuses multiple styles together. Uniquely creating hybrid blends of house, trap, and dubstep into a pot-pourri of bass, the young producer definitively pushes the boundaries of the entire EDM scene today, and a handful of the industry’s finest have recognized his potential including Skrillex, Diplo, Dillon Francis, Tchami, DJ Snake, Datsik, Borgore, Zomboy, and Zeds Dead. With slew of mentally-stimulating originals and physically-altering collaborations under his belt, such as his original “Miami Connection” with Jauz and single “Crank It” with Mija & Lil Jon, it’s safe to say that Ghastly is on a mission to redefine dance music for all.

Shmitty – It’s this challenge that fuels Shmitty’s never-ending chase for the perfect sound. The Los Angeles-based, Netherlands-born producer/DJ combines funktion and form with style, taste, and class; he mans the decks like a sniper at the watchtower, with house and techno as his artillery. A chameleon onstage, shifting from groovy down-tempo to cultish techno, he covers the full spectrum of true house music. With a deep knowledge of the history of electronic music and with a direct mainline source to the current music landscape, Shmitty melds past and present in all his meticulous sets, which have allowed him to share the stage with a diverse roster of dance music titans, including A-Trak, Claude VonStroke, Dash Berlin, Cosmic Gate and countless others. The stage is his first home, having performed at some of the top venues and music festivals across the US, including Escape from Wonderland and the Hollywood Palladium, as well as Los Angeles nightclubs Create and Exchange LA, where he holds a double residency. With the stage as his castle, the studio is his laboratory, where he grinds out techno and house-laced deep cuts, including his original debut track “Claves & Warps” featuring Tyler Rouse. The track goes hand in hand with his forthcoming single, “Pressurize” again with Tyler Rouse, out this May to create the knockout combo you didn’t see coming. On the stage and in the studio, Shmitty dominates his craft. You’ll hear it in his sets. You’ll feel it in his music. And when you do, you’ll be in for a ride.