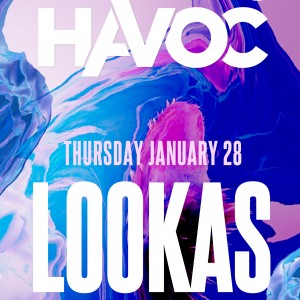 LooKas – Miami native Lucas Rego, better know as LooKas, has made impressive waves in the electronic dance music scene since late 2013. Ever since his groundbreaking remix of “Tsunami” by DVBBS and Borgeous was released, it has garnered over half a million streams in just less than three months. Moreover, the remix was commissioned by Ministry of Sound and released as an official mix in early 2014. Since then, he has debuted his original single “Anger” on BBC Radio 1’s Diplo & Friends. Noted for his signature festival trap sound, Billboard.com’s “Next Big Sound” was quick to recognize LooKas as one of the top 10 artists on their Rising Artist Chart. Furthermore, EDM heavyweights Tiesto, Skrillex, Carnage, Dillon Francis, The Chainsmokers, Adventure Club, Borgore, Bassjackers, Bro Safari, Blasterjaxx and many others have already actively supported his productions. Recently LooKas has seen tremendous releases such as his original “Chaos” on Buygore, his collaboration with Flo Rida and Sage the Gemini “GDFR” via Warner Music Group, and remixes through Sony as well as Island Records.

Tom Size – Based in France, he started producing his own songs at a very young age while he was studying at school. After creating his soundcloud page, he started uploading free tunes spotted by popular blogs such as Trap City and All Trap Music… In one year, he released more than 30 tracks. Tom size’s productions quickly received heavy support from Diplo, Major Lazer, Dj Snake, UZ and more.. In 2013, Tom size collaborated with Simeon to remix New World Sound & Thomas Newson’s hit “Flute”. Released on Spinnin’ Records, the remix smashed the festival trap scene and had more than 1 million plays. 6 months later, he released an original track with New World Sound called “Spoon” on Big Beat Records and have been played in big festivals by main artists such as Tiesto, Nicky Romero, Chuckie, Blasterjaxx, VINAI & more.