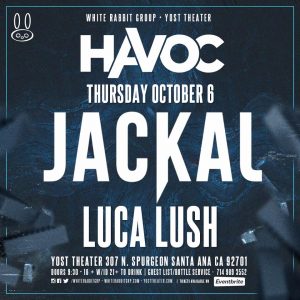 Jackal – Mikey Pennington, best known by his artist name Jackal, is a 23 year-old music producer and DJ. Originally from England, Jackal started producing when he was 19 while attending the University of Canterbury. From a young age Jackal has been musically inclined, learning to play guitar, drums and making beats on his keyboard at the age of 7. Since the release of his track “Shakedown”, Jackal’s presence in electronic dance music has quickly risen and continues to make an impression, his beats often finding their way into the sets of artists from Skrillex to Diplo. His tracks have also been remixed by artists such as LOUDPVCK and Jesse Slayter. Look for his upcoming release with Grandtheft on Diplo’s Mad Decent!

Luca Lush – Luca Lush represents an invigorating forward-thinking sound and aesthetic. After self-releasing several original productions and remixes. He has garnered millions of plays on Soundcloud in the past few months, not leaving to speculation as to why artists like Odesza, Baauer, Matt Zo, and The Chainsmokers all enjoy and support his music. While his craft is never restricted to a single genre, its multi dimensional structure embodies district synth-laden lushness.